Winter affects different people different ways: some just want to curl up in a ball and not come out ‘til spring, while others love the crisp air and want to spend as much time outdoors as possible. Scottish wildlife feels much the same: dormice and other small mammals will hibernate but many of the bigger animals will be out and about, and easier to spot than in summer because there’s less foliage in the way. So book a trip in one of our motorhomes, and get up close to a wide variety of Scottish Wildlife this winter season.

One small mammal that doesn’t hibernate is the red squirrel.  Britain’s native squirrels live in both broadleaved and coniferous woodlands. They store food for winter just underground and also in cracks in trees, and can often be seen retrieving it in good winter weather (they stay in their tree-top dreys if it’s inclement). If you see nut-shells lying around, it’s a safe bet there’s a squirrel living nearby. 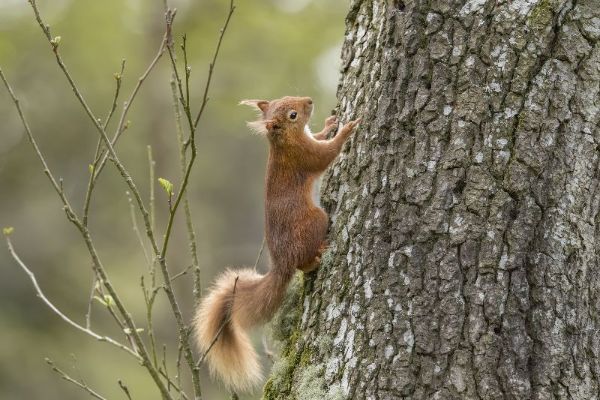 January to March is the red squirrel mating season, so they’re often seen in pairs at this time. You’re most likely to see them in the Highlands, where the grey squirrel hasn’t yet pushed them out of their territory, but there are populations in the Scottish Borders and in Angus, Perthshire and the Loch Lomond & The Trossachs National Park. The best times to see them are early and late, rather than the middle of the day.

Red deer are usually easier to spot in winter than in summer as they move down from the high ground to lower areas where they’re more likely to find food. If you think “red deer”, “Highlands” is usually the area you connect with them, but they’re also found in the Galloway Red Deer Range and on the islands of Arran, Jura and Rum.

Red deer males, with their huge antler racks, are a spectacular sight. They’re also very noisy, especially in the early winter when they’re getting their harems sorted out. They’re active both day and night, as are the smaller varieties of deer found in the lowlands (mainly roe deer), so watch out when you’re driving in the dark.

If you want to get up close with deer who are used to humans, the Cairngorm Reindeer Centre offer daily walks up the hills to visit their free-ranging herds. If that’s too strenuous or impractical for you, you can visit and pet the reindeer (also known as caribou) in their paddocks at the centre, where there’s also a shop selling meat from the family’s rare-breeds farm alongside the reindeer souvenirs. The centre is closed  in January and the first half of February to allow the reindeer to recover from helping Santa at Christmas (and to breed). 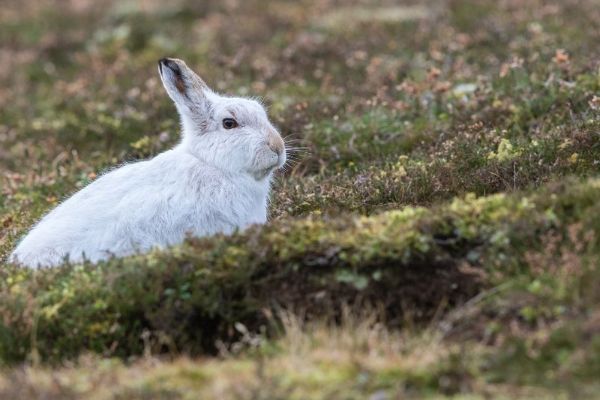 Keep your eyes peeled up in the hills and you might spot a mountain hare. A leopard may not change its spots but a mountain hare can – or, at least, it gets a white winter coat quite different from its grey-brown summer one. If there’s snow, the winter coat camouflages the hare; if there isn’t, it makes them very vulnerable to predators and therefore even shyer and harder to spot than usual.

Ptarmigan, which are members of the grouse family, also change their plumage to a wintry white. The best places to see both hares and ptarmigan are in the Cairngorms, normally quite high up the mountains. Both prefer areas remote from humans, so it’s a very lucky day when you see one.

Staying in the mountains, turn your eyes skywards to look for golden eagles, peregrine falcons and red kites hunting hare and other small prey; nearer the coast you may also see white-tailed sea eagles. Murmurations of starlings, wheeling in synchronised flight like a spotted veil, are a common sight around farmland, especially in the dusk. Less common birds to watch out for are Scottish (parrot) crossbills, redwings, waxwings, snow buntings, and fieldfares that migrate from Scandinavia for the winter. 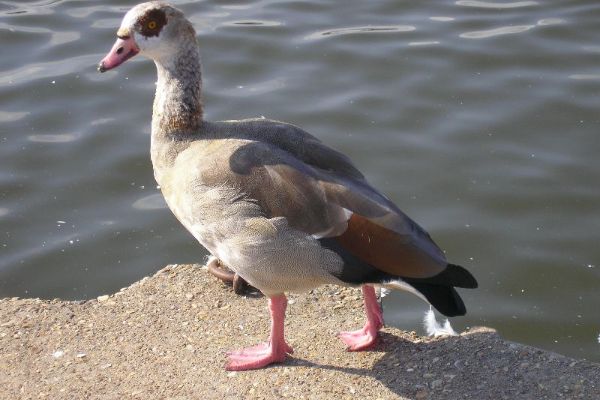 Scotland is a major destination for migrating geese and other birds that spend their summers in the Arctic. From September onwards great skeins of pink-foot, barnacle and greylag geese can be seen and heard in the skies, especially at dawn and dusk, as they move between roosting areas on the coast and feeding grounds inland. Many of them migrate even further south but several thousand remain in Scotland.

Great places to see geese in eastern Scotland include the Montrose Basin in Angus, Loch Leven in Perthshire, and the Loch of Strathbeg in Aberdeenshire. Further west, they can be found on the Solway Firth at Mersehead Nature Reserve and at Loch Gruinart on Islay. In the northern isles the best place to view them is North Ronaldsay Bird Observatory on Orkney.

Other waterfowl that over-winter in Scotland include oystercatchers with their distinctive long orange beaks, mute swans, redshank, eider ducks, shelducks and wigeon.  You can watch them puddling in the mud and sand or diving to look for food at wildlife reserves, lochs and beaches all round the country. 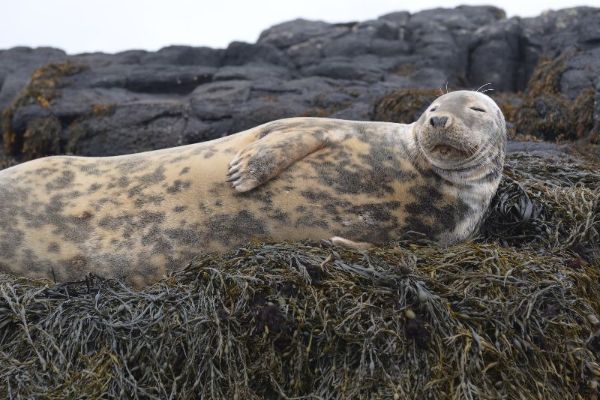 Winter along Scotland’s coast can also offer sightings of common and grey seals (where there’s no fish farming, anyway) and harbour porpoises. Inland you might spot otter and also beaver, which have recently been re-introduced to three sites in Scotland and are doing well. You may even catch a glimpse of a darting turquoise kingfisher.

Staying Safe When  Wildlife Watching in the Scottish Hills

Winter wildlife watching requires you to remain still and quiet for extended periods; there’s much less cover to hide behind and snow or water may carry sound and scent further. Good binoculars or a telescope can allow you to observe from further away, with less chance of disturbing what you’re watching.

It can be a challenge to stay warm while you sit. Something waterproof and insulated to sit or lie on – an inflatable cushion or a small section of bedding-mat – makes a big difference to your comfort.

Dress in warm and waterproof layers – you may get hot climbing a hill but you’ll need to wrap up when you get to the top or you’ll chill very fast. Good waterproof footwear is vital, and don’t forget your gloves (preferably waterproof) and hat! 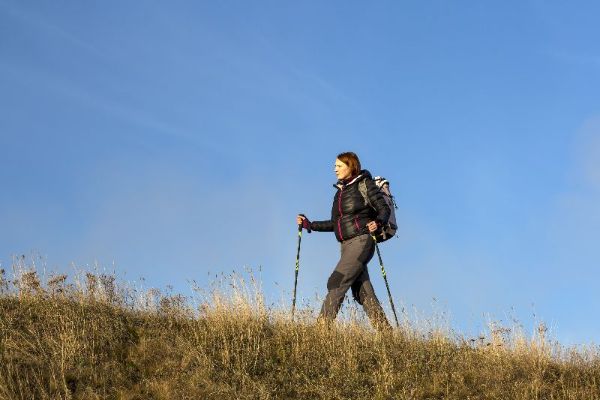 Dusk comes on surprisingly early – it’s often quite dark by 3.00pm in December in northern Scotland, especially if it’s cloudy. It’s sensible to carry a head-torch – hand torches are easy to drop and break if you trip in the dark, and a head-torch leaves your hands free and fits comfortably and securely under a woolly hat.

Take something to eat and a flask of hot drink, too. A mobile phone with GPS and a whistle are also sensible if you’re heading off the beaten track; a paper map (and the ability to read it) is a good backup if, as is quite common, there’s no mobile reception. A survival blanket takes up very little space in a backpack and weighs virtually nothing, but it could save you from hypothermia if you have an accident and can’t get back down the hill.

That may sound like doom and gloom, but it’s surprising how many people venture into the hills in winter with none of the kit and do have an accident – sprain an ankle, for example – or just get lost. You’ll be more comfortable, and stand a much better chance of reaching home safely, if you can stay warm and fed than if you can’t. These suggestions aren’t intended to deter you, but to help you get maximum enjoyment from your holiday.

Hire a motorhome for skiing and snowboarding breaks in Scotland

Scotland’s Hogmanay: see the New Year in with a bang!