April was the perfect time to take a brief two night holiday using one of the luxury motorhomes hired from Motorhome Escapes near Edinburgh.

Our first night was spent near the shores of Loch Leven in Fife (wild camp spot (Long: -3.39792 Lat: 56.22112). An ideal setting for the children to play in the woods and by the loch. Using the bikes provided with the motorhome, we took a ride around the loch and stopped for a bit to eat at the lovely Boathouse Bistro. After lunch we headed North to spend some time at Scone Palace. Just a short drive and we arrived at the spectacular Palace right in the heart of Scotland. 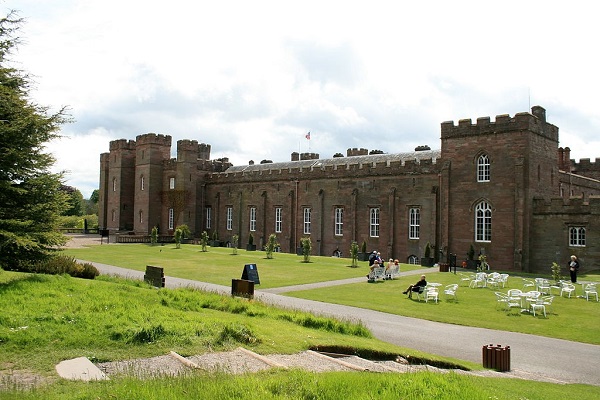 A Lesson in Scottish History

Scone Palace was once the capital to the Picts and is steeped in history, including the location where Robert the Bruce and Macbeth were crowned as Kings of Scots.  The palace was an important meeting place for the Picts 1500 years ago and was also the site of an early Christian Church.  At the Palace we were also lucky enough to see the Stone of Destiny; thought to have been brought to Scotland from Ireland and until the end of the 13th century, was used in the coronations of the Kings of Scots.  Like many other Abbeys and Churches throughout Scotland Scone Palace sustained damage in 1559 during the Reformation but the Palace did survive and has been home to the Earls of Mansfield for some 400 years.  Running water was installed in 1842 in preparation for the visit of Queen Victoria and Prince Albert along with a huge undertaking of updating the interior throughout most of the Palace, much of which can still be seen today.  We learned a lot in the couple of hours we spent inside the Palace itself.  The kids were mortified to find out they didn’t build the Palace with running water to begin with!

After we enjoyed the splendour of the ornate rooms throughout the palace with carved and vaulted ceilings we headed outside to the acres of stunning manicured gardens. The kids had some fun on the vast lawn area and we then headed to the Old Servants’ Hall Coffee Shop where we found some delicious homemade goods, we even squeezed in some time to browse the Food/Christmas Shop.  This was the perfect spot for the kids to stretch their legs and burn off some energy before getting back on the road.

Each year from April to September the State Rooms are open for viewing and the gardens can be enjoyed year round.  There are many events held at the Palace which you can find details of here: Events at Scone Palace.

After enjoying the delights of Scone Palace we headed for the historic city of Perth.  It had something for all of us from shopping to history to architecture.  Best thing is to head for the information centre at 5 High Street, Perth PH1 5TJ to get further details on things like taking a self guided city walk where you can take it all in at your own pace.  We found this suited us as a family as we could stop when the kids got tired and we spent extra time in the outdoor open spaces in the city.

Motorhome Camping in the Perthshire Forests

From Perth we continued north to Dunkeld, a lovely little village, where we ate ice creams whilst sitting by the river with the kids playing in the park. We opted to spend the night again at a wild camp spot in the woods overlooking the valley. We could have camped by the water again but opted for a forest setting this time round.

The following morning we headed back home after a very satisfying little trip. Only a weekend away but felt like the whole family had a real holiday get away in our lovely motorhome, home away from home!

A Family-Friendly Easter in Scotland

Wondering how to entertain the kids over the Easter break?  Hire a motorhome and go exploring!  Scotland has plenty to offer, indoors and out, to keep the most energetic youngster happy. Easter is traditionally the start of the Scottish tourism season, though it’s late this year and most attractions will be open from the beginning […]

Aberdeenshire has more castles per square mile than anywhere else in Britain.  With so many complete castles, stately homes and ruins to choose from, the tourist board has designed an itinerary called Scotland’s Castle Trail, which makes a great motorhome holiday. Although the route is designed to be completed in 6 days, you would have […]