Motorhome Tours of the Scottish Islands

Scotland has three main groups of islands, all on the west and north of the country;

Some of the islands are too small for motorhome tours to be practical: the roads are too small and such trees as will grow are too low to be avoided. But there are plenty of great Scottish islands where motorhomes are welcome. Here are some of the best. 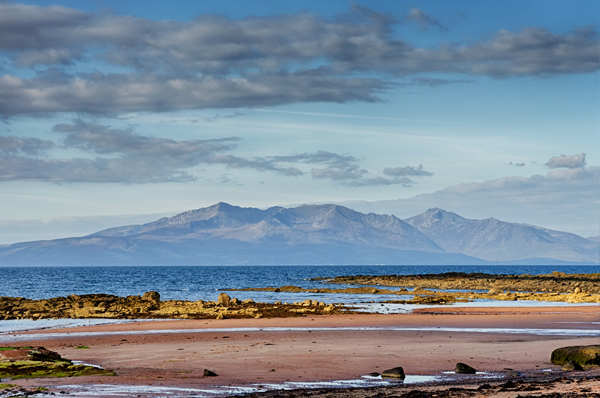 The Isle of Arran; “Scotland in miniature”

The Isles of Bute, Arran and Great Cumbrae in the Firth of Clyde between Glasgow and the Mull of Kintyre are well worth a visit. They’re all big enough to drive your motorhome round comfortably (even though Great Cumbrae is only 10 miles in circumference!), and they all have registered campervan sites; wild camping is also allowed on all of them. Cal Mac Ferries goes to all three, (AKA Caledonian MacBrayne) and you can get from Arran to Bute very easily via a stop-off in Ardrossan with Cal Mac. The tiny island of Great Cumbrae will likely be your first stop if you’re coming from Largs, as it lies between the Isle of Bute and the mainland. It can only be reached via Largs but it’s worth making the 10-minute trip and renting some bikes for an island tour. If you want to stay at the only campsite, Millport Holiday Park, early booking is recommended in summer.

The westerly Isle of Arran is often described as “Scotland in miniature”: it has lowlands, highlands (there are four Corbetts (mountains over 2500 ft) on the island), beaches, towns, history and watersports, so it caters for almost every taste. There are several campsites that take motorhomes and plenty of wild motorhome camping sites.

And just north of the Isle of Arran, the Isle of Bute boasts two fine historic houses, important gardens, standing stones, a micro-brewery, a military museum, fishing – again, most people will find something to interest them. There’s only one campervan site, Roseland Holiday park, on the island but wild camping sites are plentiful.

Explore the Scottish Hebrides by Motorhome 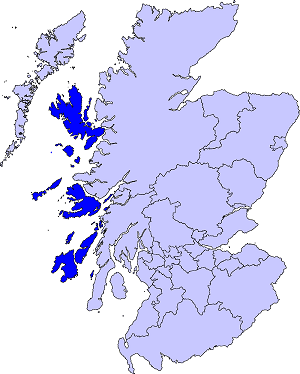 The islands that make up the Inner Hebrides in Scotland [Credit: Laurens – based on adptation of ImageGlasgowcouncil.PNG by UserBarryob]

On the other side of the Mull of Kintyre from Bute lie the Inner Hebrides, running north from Islay to Skye. These are part of the Hebrides, which is a widespread Scottish archipelago, or group of islands, stretching from the North to the South of Scotland.

The Isle of Colonsay, between the Isle of Mull and Islay, doesn’t currently allow motorhomes onto the island and some of the others (for example Coll) are too small to make driving one at all easy, but the larger islands have plenty to offer for your motorhome tour of Scotland’s Islands. CalMac ferries offer “Hopscotch” tickets to most of the islands on the west of Scotland.

In the south, Islay and Jura (your starting points for the Inner Hebrides if you are coming from the Isle of Arran/Bute), both have distilleries producing very distinctive whiskies; both also have a wide variety of wildlife to watch on land and in the sea. This is a good place for experienced sea kayakers; cycling and pony cart trips are also popular. There are three campervan sites on Islay but on Jura there’s only wild camping. Jura is reached by ferry from Islay. If you start your visit to Islay on the ferry from Kennacraig (near Tarbet, on the land just west of the Isle of Arran) to Port Ellen and finish it at Port Askaig with the ferry north to the coastal village of Oban, you’ll avoid a long drive on the narrow twisty road of the mainland.

Heading north in the Inner Hebrides you reach Mull. You can get there with a short ferry ride from either Oban or Lochaline, but Oban is much easier with a large motorhome as the road to Lochaline is narrow and winding. There are two ferries between Mull and Oban, from Craignure in the south and the multi-coloured town of Tobermory in the north, so you can land at one and return from the other. From Mull you can slip across to the holy island of Iona of the south-west tip, where you’ll find one of the best Scottish island campsites on the beach, the Isle of Iona Campsite; sadly you can’t take your motorhome across, but if you have a tent it makes a pleasant one-night stop. 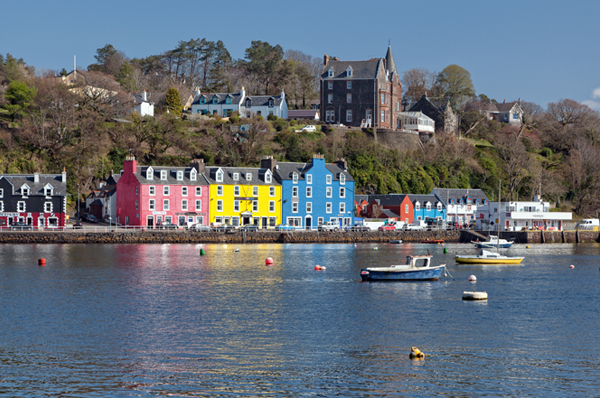 The colourful town of Tobermory, Isle of Mull

Back on the mainland, drive east from Oban to Fort William and west to Mallaig to take the ferry to Skye, following Bonny Prince Charlie’s route. Skye has everything for the holidaymaker: hills, sea, castles, towns, wildlife including golden eagles, a whisky distillery, a world-class restaurant (The Three Chimneys) – and plenty of campsites. You’ll need several days to make the most of Skye, and a week is better.

The Isle of Harris in the Outer Hebrides of Scotland

From Skye you can either return to the mainland across the bridge at Kyleakin or continue your campervan tour of Scotland by taking a ferry from Uig, at the north of Skye, north-east to Tarbert on Harris, in the Western Isles or Outer Hebrides. You can find lots of information about the Outer Hebrides, including pdf guides to the islands, at the Hebridean Web Communities and Places webpage.

One thing the guides make very clear is that the machair grass of the islands is a very fragile environment: please don’t drive over it or camp on it. There are plenty of car parks and campsites listed in the leaflets, which also give details of disposal points for the contents of portable toilets and other useful visitor information for motorhome tours.

The road signs in the Highlands and Islands are written in both English and Gaelic and here in the Western Isles you’ll probably hear Gaelic spoken. The islands are also home to a thriving Celtic music tradition; if you have the chance to attend a ceilidh (pronounced kay-lee), go – you’ll have a great evening’s entertainment with singing, dancing and “craic” (talk).

The Calanish (Calanais) stone circle, Harris tweed mills, Gearannan blackhouse village, white-sand beaches, wonderfully fresh food , a relaxed pace of life (nothing happens at all on Lewis on a Sunday), terrific scenery with views all the way to America, and an airport on Barra that only functions at low tide – Scotland’s Western Isles are perfect for a relaxing holiday.

To get to Barra in the south-west of the Outer Hebrides, you’ll need to take the ferry from Leverburgh to Berneray (which has fabulously photogenic long white-sand beaches), cross the bridges to North Uist and South Uist and then take another ferry from Eriskay to Castlebay on Barra. It’s worth spending several days on the trip. From Barra you can take the ferry back to Oban on the mainland.

A word of caution: the Highlands and western islands are the stronghold of Scotland’s notorious midges. Take plenty of midge repellent with you if you want to eat outside or go walking; a hat stops the midges getting in your hair.  Midges won’t kill you, but their bites can make your holiday much less fun. They don’t like wind or sea water so if you’re out on a boat or the weather forecast is promising a gale you’ll be fine!

The Northern Isles include two distinct archipelagos, the Orkneys and the Shetlands right up at the far north of Scotland, with Fair Isle (owned by the National Trust for Scotland) in between. You can take your motorhome on the overnight ferry from Aberdeen to Lerwick in Shetland via Kirkwall in Orkney; alternatively you can take the short routes across the Pentland Firth, from Scrabster or John o’ Groats on the north-east Scottish mainland to Stromness or St Margaret’s Hope in Orkney (http://www.pentlandferries.co.uk/ and http://www.northlinkferries.co.uk/). 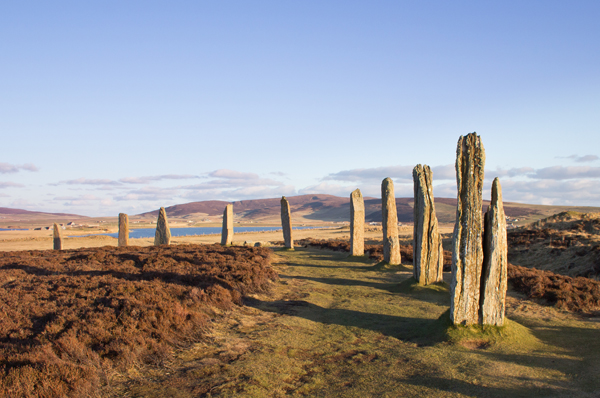 For divers, Orkney offers the world-class wreck site of Scapa Flow, where the German fleet was scuttled in 1919. For history-lovers there’s Scara Brae, the Ring of Brodgar, Stenness Standing Stones, the Maes Howe Burial Chamber and the famous Italian Chapel created by World War II prisoners of war. Or, if you take the island ferry over to Rousay (leaving your motorhome behind), you can walk the Archaeological Mile, see 1000 years of history in one mile, and be back on Mainland in time for tea. Classical music lovers can enjoy the St Magnus Festival in Kirkwall every summer, for climbers there’s the challenging Old Man of Hoy, wildlife lovers can look out for seals and nesting puffins, while for beer lovers there’s a local brewery.

If you get to Lerwick in Shetland on the last Tuesday in January you’ll see a spectacle that harks back to the town’s Viking origins: Up Helly Aa, the mid-winter fire festival. Shetland is famous for its knitting, celebrated in Wool Week at the end of September every year. In between (and any other time) there’s Shetland music, a distinct strain of  the “Celtic” style, to enjoy in pubs and clubs all over the islands. Shetland is also famous for its seafaring tradition, which is often reflected in its art and literature. At the Jarlshof settlement, you can see what life was like on the islands over a 5000 year period, from the Bronze Age to the Middle Ages. And, wherever you look, there’s water: there are over 100 Shetland Islands, with 1,700 miles of beautiful coastline surrounding them.

Wherever you take your motorhome in the Scottish islands there’s something to see, whether you want culture, wildlife or fabulous views. We hope these route ideas have inspired you to do some Scottish island hopping on your next holiday with us.