Scotland is famous for many things: scenery, whisky, kilts, music, sports, Scottish dancing and more. Almost all of them have a festival dedicated to them, sometime in the year, somewhere in Scotland. A motorhome holiday is ideal for setting your own itinerary and can be a great way to sample some of the fantastic festivals we have on offer during the Scottish summer. Here’s our line-up of some of the best ones to visit this summer 2017.

Whether you like classical, folk, Celtic or rock, there’s a festival for it. MoFest, the Montrose Music Festival, kicks off the season on the last weekend in May, with headline acts Deacon Blue and The Beach Boys. There are bands large and small in practically every pub all weekend and the Big Stage right on the High Street where anyone can watch. Best of all, the only performance you have to pay for is the Friday night gig.

The picturesque East Neuk of Fife is home to a festival of chamber, jazz, folk and electronic music, plus exhibitions, films and literature. All that is crammed into less than a week, 28 June-2 July! The quirkiness of the venues may have something to do with the popularity of the Festival. Performances have been put on in a Scout hut, a nuclear bunker, churches, an RAF base and even outdoors.

6-9 July sees two great festivals for lovers of traditional music: the Stonehaven Folk Festival in Aberdeenshire, and the Newton Stewart Traditional and Acoustic Music Festival in the opposite corner of the country, Dumfries and Galloway.

HebCelt, the high-energy Hebridean Celtic festival, is in mid-July in Stornoway, Isle of Lewis. This year’s headline acts include The Waterboys, Dougie Maclean, Lucy Spraggan and Skerryvore. It’s a great reason to cross the water to the Hebrides and discover Scotland’s wild west. 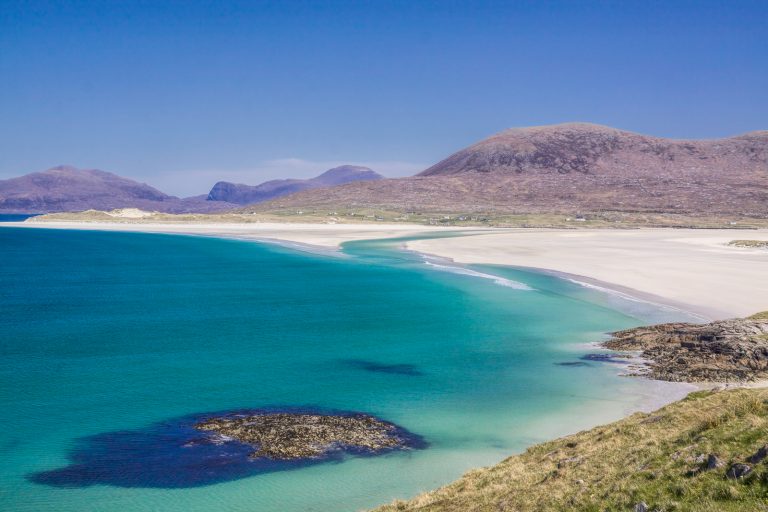 Why not combine the high energy Hebridean Celtic Festival with a tour of the picturesque Outer Hebrides?

Another Celtic festival, Speyfest, happens in Fochabers, Moray, 28-30 July. It boasts a special programme for young people, as well as Celtic rock and ceilidhs, and musicians from all over the world take part.

Glasgow’s international bagpipe festival, Piping Live, brings soloists, quartets and bands of pipers together. The city-centre jamboree lasts a whole week, 7-13 August 2017. Young pipers compete to be crowned Pipe Idol, there are events for amateur and professional solo pipers – and even a chance to try the pipes yourself! Or you could taste whisky, have a go at Gaelic, or take a look at the history of the pipes at the Museum of Piping.

One of Scotland’s best-known music festivals, T in the Park, is taking a break this year due to problems with the previous venue. Hopefully it’ll be back soon. The Isle of Bute Jazz Festival is also taking a year off.

The Edinburgh Festival is not just one festival any more – it’s six, plus the Military Tattoo.

The Jazz and Blues Festival follows (14-23 July), with Jan Garbarek, The Average White Band and the James Taylor Quartet among many others.

The Arts Festival is on 28 July-28 August; if past years are anything to judge by it will be eclectic, innovative and thought-provoking.

On the Fringe, almost anything goes, especially comedy. It’s actually bigger than the “official” event now and covers an even wider gamut of events. It takes over stages in every nook and cranny of Edinburgh and, as long as they can find a venue, pretty much anyone can take part. 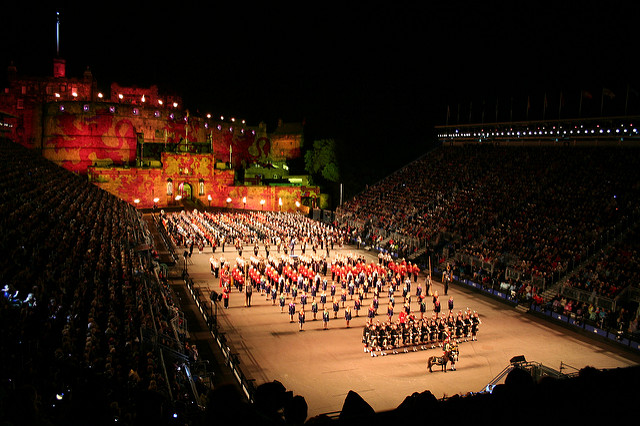 The Royal Edinburgh Military Tattoo enthrals audiences 4-16 August, not just with tartan, pipers, Scottish dancing and marching bands but also with daredevil rides and international performers. This year the Royal Navy (including the Marines) are the featured armed service.

The last link in the Festival offering is the International Book Festival, on 12-28 August. It claims to be the largest celebration of the written word in the world, hosting over 800 international writers to discuss their work.

If ever the claim was true that “there’s something for everyone”, it’s true in July and August in Edinburgh. If you want tickets for the most prestigious events, especially for the International Festival, you need to book very early. (And, if you book online, get to the venue early, too; there will be a queue and you don’t want to miss the start of your show.)

You’ll also stumble across many free shows and street theatre events. The big free event is the firework display on the final night of the International Festival (you can buy tickets, too, and sit in Princes Street Gardens to watch). You can watch from any of Edinburgh’s 7 hills, but the best place is Calton Hill, at the foot of Princes Street; get there early, though!

If you’re the energetic type, there are plenty of outdoor festivals around Scotland to enjoy. The Selkirk Mountain Bike Marathon, on 14 May, offers a tough but scenic ride through the Scottish Borders. You can choose to ride 25km, 50km or the really tough one – 75km.

The Edinburgh night ride is a bit different, in that you ride 50 miles in one night. As it takes place 17-18 June it won’t be very dark, and the city should be pleasantly quiet. It’s a charity event, but you get to decide which charity you want to support.

Once you’ve recovered from that you can run in the Edinburgh Marathon on 27-28 May, starting in Princes Street and finishing in Holyrood Park. Or just watch…

A month later, the Glasgow to Edinburgh trek is one of Scotland’s hardest walks: 96 km and 30 hours long. If you’re up for that, it’s happening 22-23 July. You can also join in for day or night treks of 40 or 56 km if you’re not up to doing the whole distance. It’s all in a good cause: research into heart disease.

And if you’d rather just sit back and watch someone else do all the hard work, you can enjoy fast and fiercely-fought sport at the World Badminton Championships in the Emirates Arena, Glasgow, 21-27 August.

No Scottish summer is complete without a visit to a Highland Games (also known as a Highland Gathering). From Durness in the far north-west to North Berwick, just south of Edinburgh, from Portree on Skye to Aberdeen, Highland Games events cover the country, even well outside the Highlands. 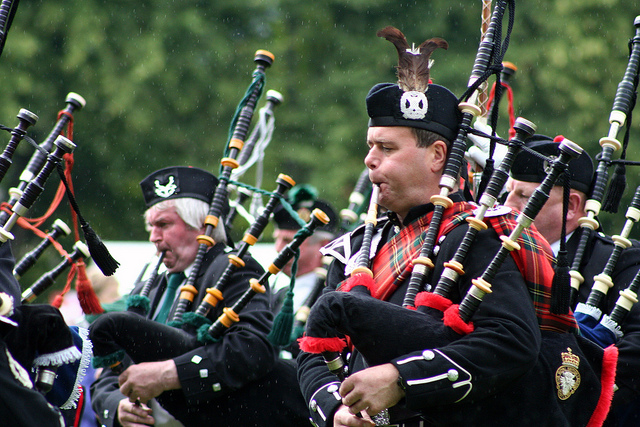 At any Highland Games there are competitions for pipers and dancers, athletic races and feats of strength. There are also usually craft stalls, terrier races, venison burgers, whisky and beer tents, families out to enjoy themselves … and weather. But whatever the weather, the show goes on, so be prepared.

The Scottish Highland Games Association is the ruling body and 62 events are listed on their website for 2017. The season starts in May and goes through to September. There are so many, you can often attend two different events in one weekend. It’s not always the big events that are the most fun, so if you see one advertised wherever you are, do drop in and join the fun.

Finally – it’s not quite a Highland Gathering but it comes pretty close – the Royal Highland Show, 22-25 June at Ingliston, next to Edinburgh Airport. This is primarily an agricultural show but there’s a bit of everything else too, from cars to tea-cosies, waterproof jackets to dog rescue charities. Not forgetting local food and drink, tartan, pipers and Highland dancers. A great way to spend a weekend!

Whatever type of festival you want, there’ll be one somewhere in Scotland sometime this summer – far more than we have room for here. Scotland boasts fantastic scenery and hosts who know how to put on a good party – a motorhome vacation can be the perfect vehicle to experience the Scottish hospitality. Enjoy the fun, sample the local goodies, and take part if you can!