What’s on in Scotland, Autumn-Winter 2017

If you’re considering a trip to Scotland this autumn or winter, you may be wondering whether there’s anything going on. The answer is a big “yes”!  Scotland can offer plenty to do, indoors and outside, all through the year. Here are some ideas for the later months.

Scotland 2017 is Perfect for History Lovers

2017 is Scotland’s Year of History, Heritage and Archaeology, and there are events all over the country celebrating our past and our culture. For more details, visit their page on The Visit Scotland website.

Scotland has a long connection with Scandinavia, and our Viking heritage is remembered at festivals all over the country at different times of year. In Largs, on September 2-10, they’re celebrating the Battle of Largs in 1263 between King Alexander of Scotland and King Haakon of Norway. There’ll be a living history village, craft fairs, plenty of food and on-stage entertainment. The festival culminates in a torchlit procession, fireworks and the burning of a Viking long-ship. 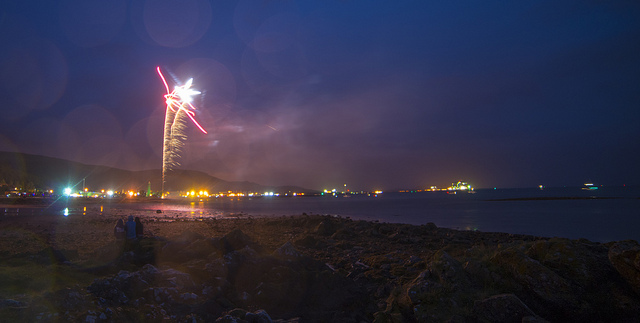 If you prefer your history a little more sedate, the Borders are celebrating their historic heritage during the whole of September (1st-30th), with walks, talks, theatre events and living history enactments at venues across the region.

Further north, the Highland Archaeology Festival is on 30 September-15 October in Inverness and the locality. You’ll find walks, demonstrations, self-guided trails, talks and even a chance to take part in an archaeological dig. Delve into Scotland’s ancient past and get a feel for the country in a way few people ever do!

Traquair House, just outside Innerleithen in the Borders, plays host to the Beyond Borders International Festival of Literature and Thought on August 26-27th. The name’s quite a mouthful and the programme is just as big.  They’ve got writers, artists, broadcasters and politicians, among others, debating and performing. There are also art exhibitions, dinners, literary walks and bike rides if all that talking gets too much for you.

Traquair House is worth visiting just for itself: a turreted medieval house with its own brewery, and gates that haven’t been opened since the last Jacobite rebellion, it’s a beautiful house full of history in a lovely part of Scotland. 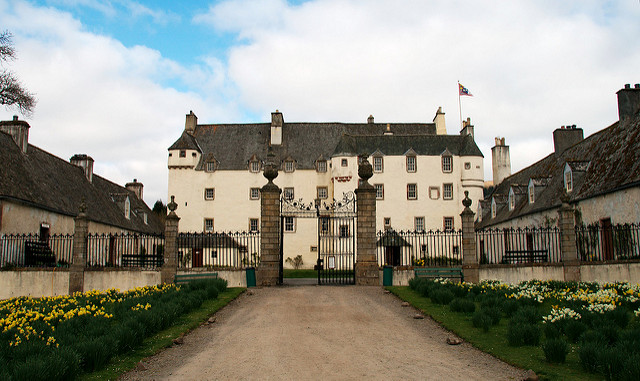 Traquair House dates back to 1107, and was originally a hunting lodge for the kings and queens of Scotland. Photo credit: Patrick Down

Scotland’s Book Town, Wigtown in Dumfries and Galloway, celebrates all things literary 23 September -2 October. They have authors talking about their books, critics talking about other people’s books, writing workshops for teenagers, storytelling events for children, films and theatre, exhibitions, garden visits and concerts.

For those who want a little movement with their words, there’s a fun run and a performance of Wigtown’s Got Talent. If you’re even vaguely interested in books, Wigtown’s a great place to go any time of year (there are bookshops in the most unlikely places), but it really comes alive at Festival time.

Dundee takes up the literary baton in October: 2017 will see the 11th Dundee Literary Festival, run by the University of Dundee. They haven’t yet revealed what this year’s programme will include but last year they covered comic books and new writing among a wide range of other subjects.

If you want an event to get your blood pumping, Knockhill Racing Circuit has the Dunlop MSA British Touring Car Championship on 12-13 August, with triple champion Gordon Shedden returning to his home track for a fourth try at the title. In November they have a Guy Fawkes-inspired night of action at the Scottish Drift Cup event.

Angus is the focus of cyclists in September, gathering for the Angus Cycling Festival. There’s something for all levels of fitness and every type of rider: triathlon, Fat Bikes ride, a road ride up the majestic Angus Glens, family rides, leisurely ladies’ ride, trick jump competition, youth races and The National Scottish Cross Country MTB Championships.

One highlight, on 2 September, is the Forfar Funduro for mountain bikers, with a thrills-and-spills course that includes woodland and slate quarries. There are plenty of traders to buy kit and new or refurbished bikes from, you can test yourself on the cycle skills course, and toddlers can try the Trail Tots bikes. 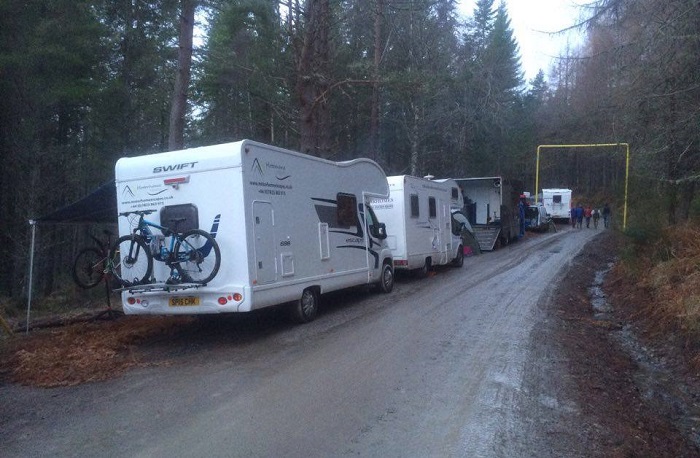 Motorhome rentals can be a great way to sample the muddy delights of a Scottish biking festival!

The Royal Deeside Cycling Festival, 9-17 September, provides a long week’s-worth of entertainment for road-bike-lovers, centred around the Etape Royale on 10 September. That’s Scotland’s one and only 100 mile closed-road cycle sportive – a very serious race over this mountainous terrain.

(A ceilidh, pronounced caily, is an evening of Scottish music and dancing, sometimes with singing and storytelling. The music is usually played on fiddles (violins) and accordion, though you’ll often find whistles and drums too. Pipers don’t usually take part: the pipes sound best outdoors.)

30 November is the feast of Scotland’s patron, St Andrew, and it’s a good excuse for a party – not that the Scots need an excuse! The University city of St Andrews, in Fife, spends the whole of November celebrating. The focus is on local food and drink, and you’ll find top-name chefs and tastings all over town.

East Lothian celebrates Scotland’s flag and history with a Saltire Festival that runs 24-30 November. You can attend horse-racing on the coast at Musselburgh (dress warmly!), listen to live music, eat and drink local produce, play golf in the dark, do a night-time 10km fun run, or listen to music and comedy. If you visit one of the historic sites in the area, you may be lucky enough to witness a re-enactment of a local battle or event.

Dundee also likes to celebrate its multiculturalism: you’re as likely to find Bollywood dancers and African drummers as a Scottish ceilidh band.

Glasgow’s holding a St Andrew’s Day torchlight parade through the city centre on November 26th, while Irvine prefers to light up the water, with a Festival of Light at the harbour and fireworks on the day itself (30 November). Oban, another watery town, takes 10 full days to wish St Andrew a happy feast, with ceilidhs, whisky tastings, parades and street shows.

Many towns join St Andrew’s Day and Christmas together by switching on their Christmas lights on the last weekend in November, so Scotland turns into a fairy-light wonderland. It’s worth visiting just for that!

A word of caution: some of the details of the events listed above had not been finalised at the time of writing (February 2017), so it would be sensible to check online before travelling, especially if you’d have to buy tickets.

There’s plenty on in Scotland in autumn and winter. These are the big, headline events but you’ll find smaller ones all over the country to suit your tastes. So don’t feel that Scotland’s only for summer. It may be cooler in the later months, but that’s just a good excuse to buy whisky, tweed or a good thick sweater – and party!